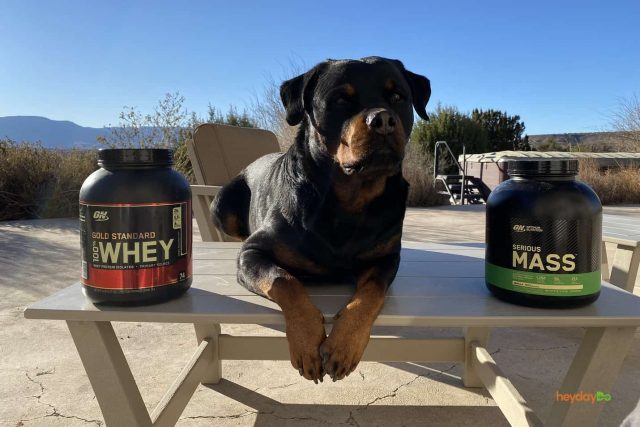 Unfamiliar with what makes a mass gainer powder a completely different animal than a typical whey protein?

Well in this whey protein vs mass gainer article I compare & contrast the two, sharing with you several of what I think are sharp & important differences between them.

Knowing their distinctions is useful if you’re considering supplementing your diet with either of them, since the benefits & effects you could get from taking one or the other may not be at all the same.

Since these two supplements are different they have different purposes, and so I will also share what I think are the best uses for whey protein & mass gainer supplements in your own diet.

As is my custom here on heydayDo, I will provide links to all of the relevant sports science and medical resources, clinical studies, & nutritional data used in this article.

I’ll be giving you my list of differences along with providing examples & background for each one along the way.

And for some of the nutrition comparison examples I thought it’d be cool to compare two products from the same company — one their mass gainer and the other chosen from one of their whey protein powders.

Most of the big names in the protein powder universe put out a mass gainer too, so I’ll probably be using a pair from the likes of Optimum Nutrition, Dymatize, MusclePharm, etc.

Note: Any product images or product names in blue will open in a separate tab onto their product pages on Amazon if you want to check today’s price, read reviews, etc.

Whey vs. Mass Gainer: One thing vs. Many things

Bottom line: Whey protein powder is just one dairy-based ingredient, but most mass gainers have several more ingredients in them than just whey.

Whey protein powder comes from a single source — a cow — and it’s created by being a by-product of the cheese-making process used by the dairy industry. (1)

Here is an example of a clean whey powder from Opportuniteas.

It has only one thing in it (whey protein), so they don’t even have to post an Ingredients list on their Supplement Facts label: 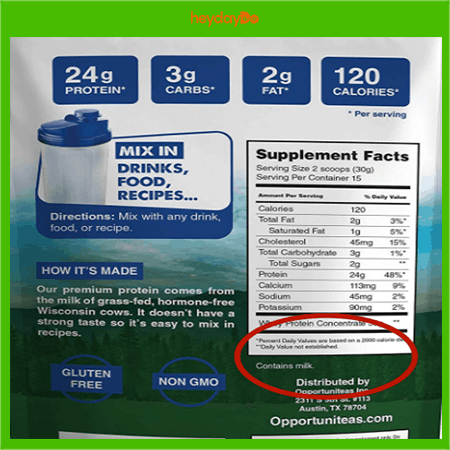 Contrast that with this mass gainer label from Dymatize’s Super Mass Gainer: 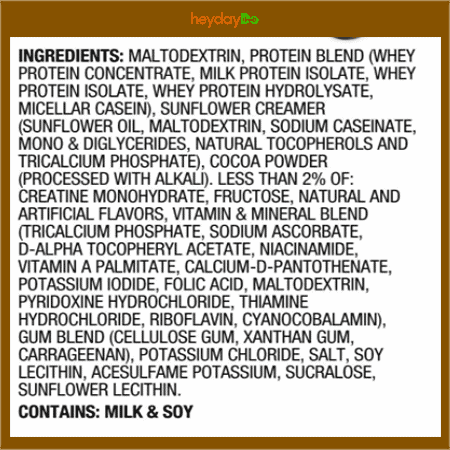 As you’ll see in the next section on ingredients, even most decent-quality whey protein powders that have been flavored & artificially sweetened still have far fewer “working parts” than a mass gainer.

No doubt there are a boatload of whey protein powders in all shapes, sizes, & flavors flooding the market these days.

Take a look at this:

And despite the wide variety that whey powders come in, at the end of the day they are a product built around the same single ingredient, whey protein.

Here’s what’s in Serious Mass, and note that all of the vitamins, minerals, & performance supplements you see on its Supplement Facts panel have been added, thus they are not naturally-occurring except for the calcium & a bit of the sodium (both from the milk protein.)

I count 42 ingredients in Serious Mass.

By contrast there are only 9 things in Optimum Nutrition’s flagship whey protein powder: 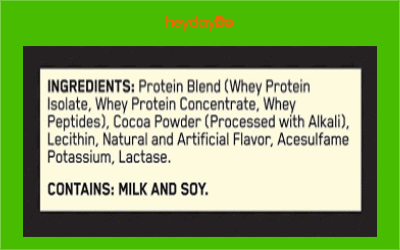 Note also that there are no additional supplements added to Gold Standard Whey like there were in Serious Mass.

Bottom line: The largest macronutrient in most mass gainers is carbohydrate, while whey powders are highest in protein.

And many mass gainers have a very high percentage of carbs in them just as the macros in most quality whey protein powders are similarly dominated by protein.

Although it will contain small (or only trace) amounts of carbohydrates & fat, whey protein powder is essentially just that: protein.

Big surprise there I bet, huh?

And this is true regardless of what type(s) of whey it is made from, be it

A quick way to determine what the macronutrient percentages are for any protein powder is to head to its Supplement Facts panel, grab some numbers, & do a little simple math (adding & dividing).

Let’s do this for both our mass gainer & whey powders that were in the last example, then compare the numbers side by side.

This will clearly illustrate to you just how nutritionally different these two types of powders really are. 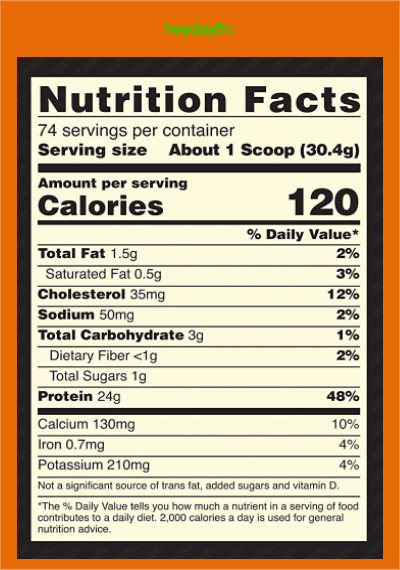 Here’s what we get in a single serving:

Adding them together, our total macros in that serving is 28.5 grams, so now we just divide each of the macros by the total (28.5 grams).

That’ll give us the percentage of each one:

As you can see, ON’s Gold Standard whey powder mostly consists of protein, and by a huge margin too.

Now let’s look at how different the macros in their mass gainer are. 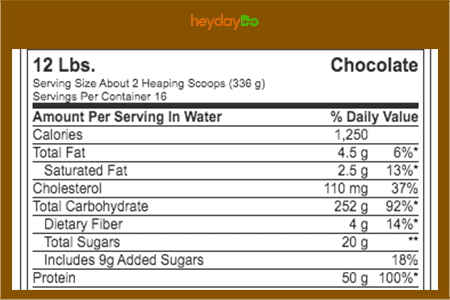 Here’s what we get in a single serving — which is gigantic by the way — as you’ll see a little later:

Adding them together, our total macros in that serving is a whopping 306.5 grams, so like before we just divide each macro by the total.

That’ll give us the percentage of each one:

This chart below paints a clear picture of the macronutrient differences between whey protein powder & a typical mass gainer. 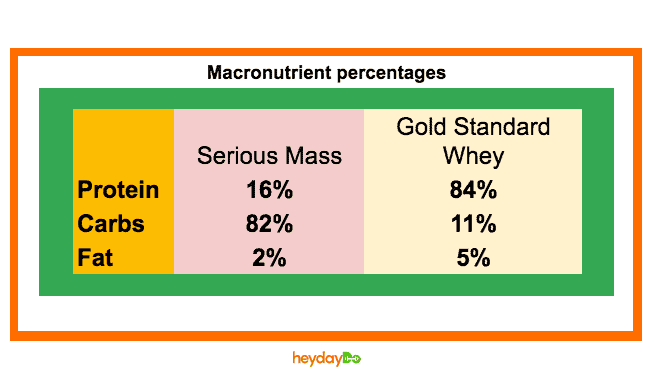 Bottom line: One of a mass gainer’s main roles is to provide additional calories to your existing diet.

So it’s probably not a big surprise that its serving size is a lot larger than your typical whey powder’s serving size.

And in many cases, the mass gainer’s serving is SEVERAL TIMES larger than most whey protein products.

Here’s a look at the serving sizes from Gold Standard Whey & Serious Mass, and I’m sure you can guess who’s who. 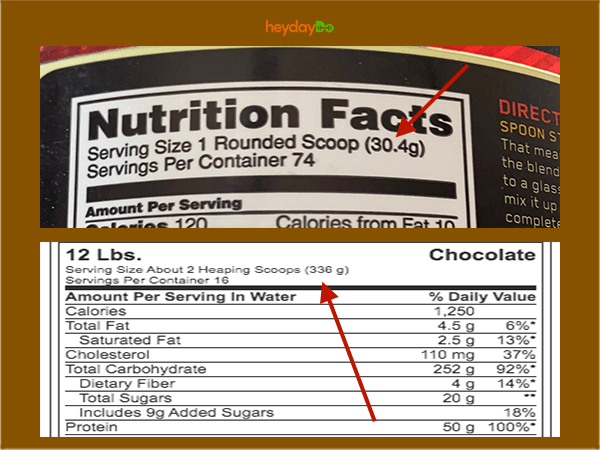 And here are a couple of pictures that show just how big a Serious Mass scoop is & remember, two heaping scoops is its suggested serving size.

That’s the Gold Standard whey scoop that is easily fitting inside Serious Mass’: 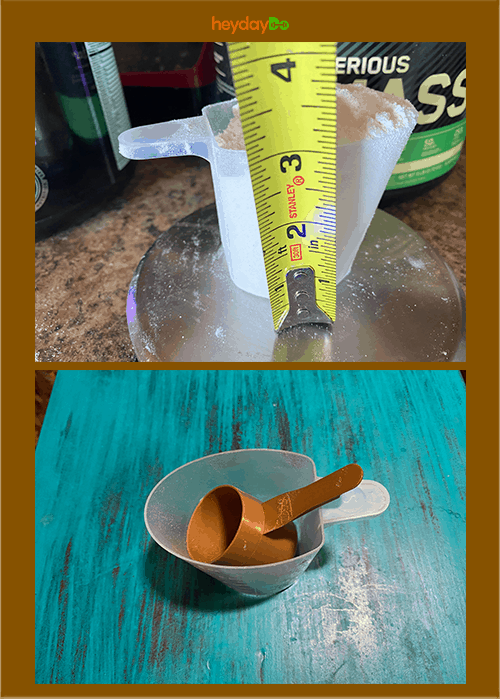 Translating their grams per serving into ounces, Gold Standard whey protein is just a little over an ounce & Serious Mass’s serving size weighs 12 ounces, or 3/4 of a pound.

Mass gainers have a lot more calories than whey

Bottom line: Given the difference in serving sizes we just looked at — 336 grams vs. 30 grams — it’s no wonder that there’s a big difference in their calorie counts too. And in fact, all mass gainers by their very definition are high-calorie supplements, whereas whey protein is a low-calorie product.

On a per serving basis, Optimum Nutrition’s Gold Standard whey protein powder has only 120 calories, while their Serious Mass powder contains 1,250 — that’s more than 10 times as many calories. 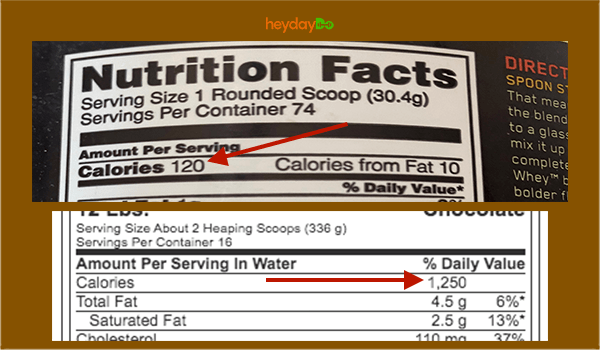 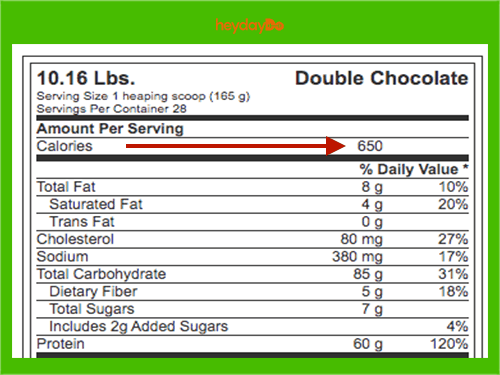 Is whey vegan? No.

Whey protein is a dairy by-product that comes from cow’s milk, and is therefore not vegan.

But there are a few well-regarded vegan mass gainer powders on the market, like Naked Vegan Mass.

And most mass gainers get those really high amounts of carbohydrate by using maltodextrin, which is a high glycemic index carb manufactured out of corn, rice, or tapioca root.

Mass gainers are usually quite high in carbs, whey powders are high in protein.

Knowing these three sharp distinctions makes it easy to guess that the best uses for whey protein & mass gainers would probably be different from each other as well, and they are.

Mass gainers have the combo of high glycemic carbs & rapid-absorbing protein (whey blends) to assist the intense exerciser, be they an athlete who weight trains, or a serious weightlifter.

As I mentioned up in the vegan section, post-workout consumption of high GI carbs with protein is very beneficial for those who really get after it in their fitness training. (5)

Mass gainers also provide the necessary “in between meal” & post-workout calories to keep the serious trainee in a calorie surplus, which will help her or him gain weight & build muscle.

Whey powder is a protein supplement

On the other hand, whey is simply a high-quality, fast-absorbing, lean (low calorie) protein source that is ideal for a healthy way to bump up your daily protein intake if you’re not getting enough from your meals.

While a mass gainer has a lot of calories in it as we saw earlier, clean whey powder is a high-protein, low calorie source — since it is essentially both fat-free & carb-free.

How to Use a Mass Gainer, How It Works, Side Effects, & More

How To Build Muscle & Gain Weight If You’re An Ectomorph

Make Your Own Homemade Protein Shake Recipes for Weight Gain 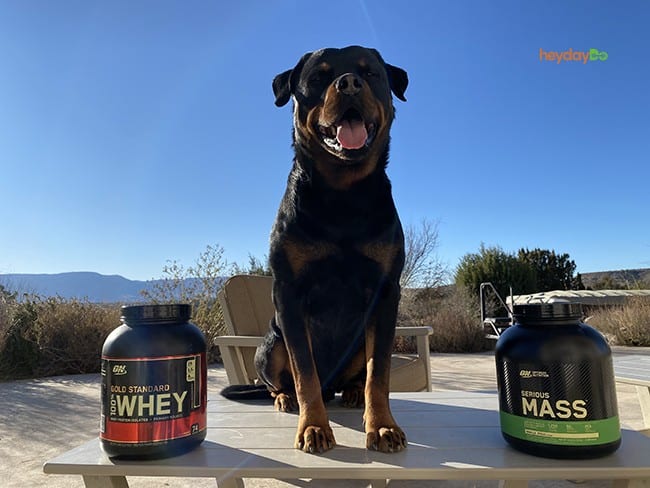 I hope that my article on comparing mass gainer powders to whey protein products is useful to you, and I wish you well on your fitness journey.

PREVIOUS POSTCuraMed vs Curamin: How They’re Different + Best Uses For Each
NEXT POST6 Easy Ways To Sell Used Exercise Equipment 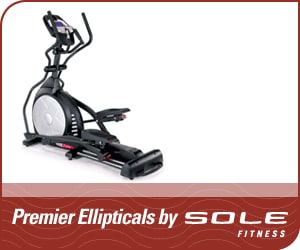 9 Best Treadmills for Heavy People in 2022

My Detailed Review of CurcuminMD Plus by 1MD

Do Ab Belts Work? Here’s Exactly What Ab Stimulators Can & Can’t Do

My Hunt For The Best Optimum Nutrition Flavor

What Happens If You Lift Weights But Don’t Eat Enough Protein?

Should I Do Cardio After Leg Day? What Sports Science Says

The Recovery Benefits Of Taking A Week Off From Working Out

heydayDo.com is a participant in the Amazon Services LLC Associates Program, an affiliate advertising program designed to provide a means for sites to earn fees, at no cost to the consumer, by advertising & linking to Amazon.com. heydayDo.com participates in similar affiliate programs with other advertisers as well.

7 Dumbbell Exercises for Flabby Arms Over 60 (or any age)

Losing Weight After 60 With These 7 Proven Ideas & Exercises

How To Build Muscle After 60: My Promising Strategy

My Simple & Effective Plan for Losing Belly Fat After 50

9 Best Treadmills for Heavy People in 2022

My Best Bike for Heavy People Review in 2022

My Best Mini Stepper Review: 7 Machines For Home Use

My Best Cheap Power Rack Review (Squat & Half Racks Too)