In this article I’ll be sharing a detailed review of MusclePharm’s flagship whey protein product, continuing my relentless sailing through the crowded sea of protein powder supplements.

Combat Protein Powder is a very popular protein supplement with very high grades from its (tens of) thousands of buyers all over the internet plus from shoppers in the big box retailers like Walmart & Costco.

Here’s a photo of the Cookies ‘N’ Cream flavor, which my wife snagged for me during a Costco run for the purpose of this Combat protein powder review. 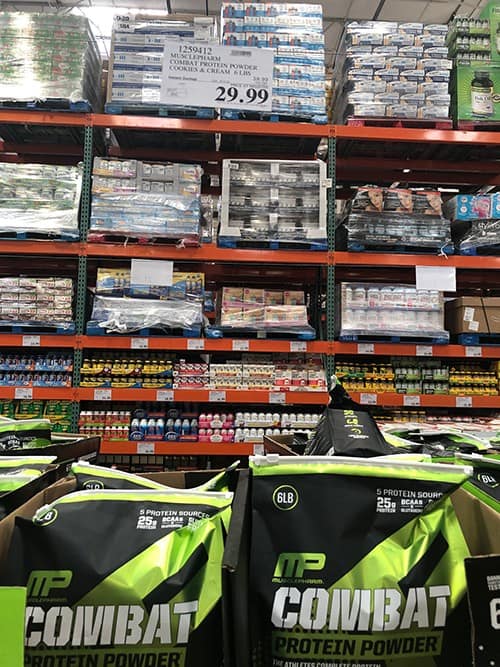 (They have this 6 lb. bag size on sale often, and Costco has Combat’s whey protein powder stacked by the pallet load in the supplements section.)

MusclePharm’s Combat Protein Powder has 5 types of protein in it:

* It is a lean protein source that delivers 25 grams of protein per serving, has a low carb count of only 5 grams, low fat, & thus a low calorie number (per serving) of 140 for the Cookies N’ Cream & only 130 for the Chocolate Milk flavor.

* Adequate protein intake is a critical component for achieving lean muscle growth, and Combat protein powder is a decent dietary supplement choice towards that goal.

* Combat Protein Powder has great buyers’ ratings, with somewhere around 20,000 reviewers across the online universe giving it 4.6⭐, and it is one of the cheaper whey protein powder products on the market.

And later on I’ll compare this MusclePharm protein blend to another one: O.N.’s Gold Standard Whey, also a Costco favorite & the biggest-selling whey blend in the world.

* Combat Protein Powder is not be confused with another MusclePharm product whose package looks very similar, Combat 100% Whey. 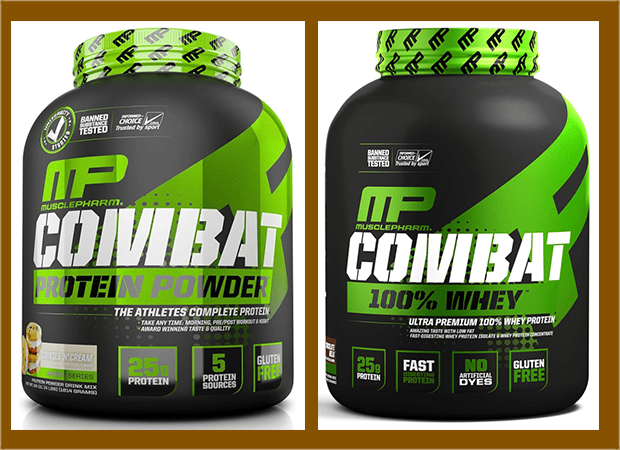 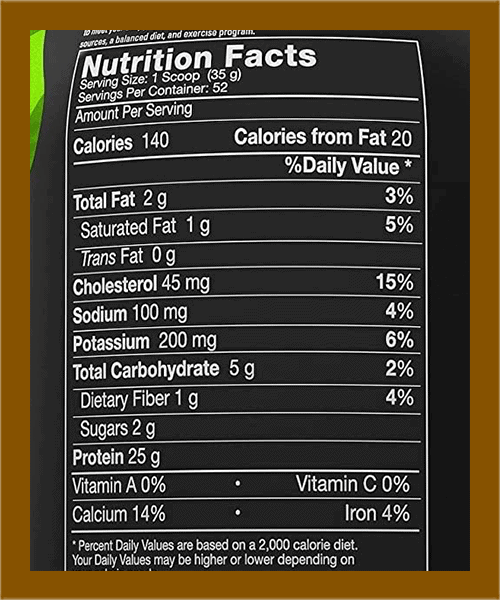 * 71% protein per serving by weight

* Carbs, fat, & sugar per serving higher than pure protein powders, but lower than the really processed junk out there

* Same goes for the sodium level

MusclePharm doesn’t put an amino acids profile panel on their Combat protein packaging or on their website.

No worries. I wrote to them asking for one, and they were quick to email it to me. 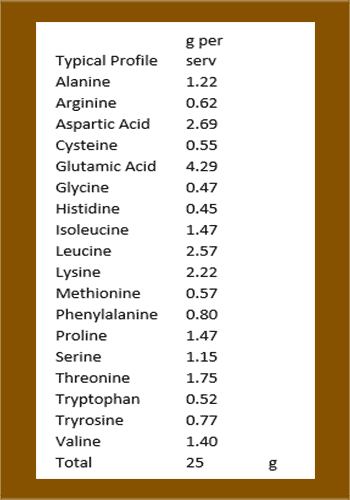 Note: This is for the Cookies N Cream version that I got. 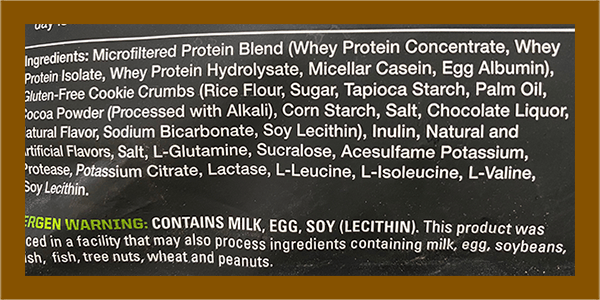 Main takeaway: lots of stuff in it

Looking at the long ingredients list, I can separate it into 4 main groups pretty easily:

Note: Since this “Microfiltered Protein Blend” that MusclePharm came up with falls under the FDA’s proprietary blend guidelines, they don’t have to disclose the quantity of each ingredient. (4)

The theory behind this use of 3 types of protein — according to the MusclePharm scientists — is to provide proper protein utilization over a longer time period compared to pure whey alone.

Whey is one of the fastest-absorbed proteins to be put to use by our bodies: 20 grams’ worth in approximately 2 hours.

This is why it’s a top choice among weightlifters as a post-workout supplement, since rapidly absorbing protein can make its way to the muscle tissue quicker to stimulate growth & repair, AKA muscle protein synthesis.

The Cookies N Cream flavor has 11 different things in it, including sugar, palm oil, salt, & soy.

It’s important to know these ingredients are not in large quantities; it’s just the flavoring part of the Combat Protein Powder.

But also — for some of us, it’s equally important to know that they’re even in there at all.

Aside from what’s in the Cookies N Cream flavorings, there are a few ingredients to point out in case there’s something you’d like to avoid.

* Soy lecithin is a soy-based food additive in the emulsifier family, meaning it is used to help the powder blend more easily with liquids. (5)

* Sucralose – also known as Splenda, it’s an artificial sweetener that the FDA approved yet its safety is among health authorities& nutritionists. (6)

* Acesulfame Potassium – another FDA-approved artificial sweetener whose use is questioned by some nutrition researchers but OK’d by others. (7)

MusclePharm adds extra amounts of 4 amino acids to their Combat Protein Powder during manufacturing, beyond what naturally comes from the proteins in it.

They are the 3 branched-chain amino acids leucine, isoleucine, & valine, plus the non-essential amino acid l-glutamine.

Adding the glutamine raises the grams of protein per serving number.

L-glutamine gets mentioned at the gym as either a performance enhancer for weightlifters, or as a training & muscle recovery aid. (8)

Extensive sports science research on the effectiveness of l-glutamine hasn’t yet definitely proven it helps build muscle, according to the ISSN (International Society of Sports Nutrition). (9)

But glutamine has been shown in studies to assist in muscle recovery following strenuous exercise. (11)

Oddly enough, this effectiveness occurred only in men, as female subjects did not show any muscle recovery benefit from glutamine supplementation. 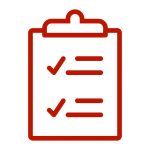 Besides the nutrition side of things, there are a few other qualities about protein powders that I think are worth considering:

For taste-testing protein powders I mix them with 8-10 ounces of just plain water.

I tried both the Cookies N Cream & Chocolate Milk flavors alongside Optimum Nutrition’s Gold Standard Double Rich Chocolate (more on that comparison below).

They are both very tolerable no doubt, but to me they both have a synthetic vibe that my taste buds notice.

And I’m fairly certain that is due to the double combo of artificial sweeteners, sucralose & acesulfame potassium.

But the fake-y taste wasn’t over-the-top, and mixing it in with smoothie ingredients like fruit & spinach in a blender covered its artificial flavor just fine for me.

Disclaimer: I have finicky taste buds. I think it’s because I’ve eaten real clean for so long, but I’m not sure. And them taste buds can pick off an artificial sweetener from a mile away too…

You may already know this, but we each have unique & subjective taste buds, so our respective senses of taste are unlikely to be similar. (12)

Both flavors of Combat protein powders mixed very easily & very quickly with only a few of the teeniest-sized (non-offensive) clumps showing up in the Cookies N Cream.

These were (my guess) from the “cookie crumbs” ingredients, since the Chocolate Milk flavor had no clumping at all.

After another couple of shakes of the Cookies N Cream, most of it was dissolved.

per 25g of protein

I don’t use the cost per ounce you see on Amazon (& elsewhere) to compare protein powder prices side-by-side.

I use the cost of just the protein, since an ounce could be an ounce of crap if it’s a crappy product.

(It requires a little math but my body is grateful…)

I chose those two because they’re similar to Combat Protein Powder: all 3 are similarly processed and also spiked with the amino acid l-glutamine.

You can see Combat Protein Powder is quite a bit cheaper than two of its closest competitors. 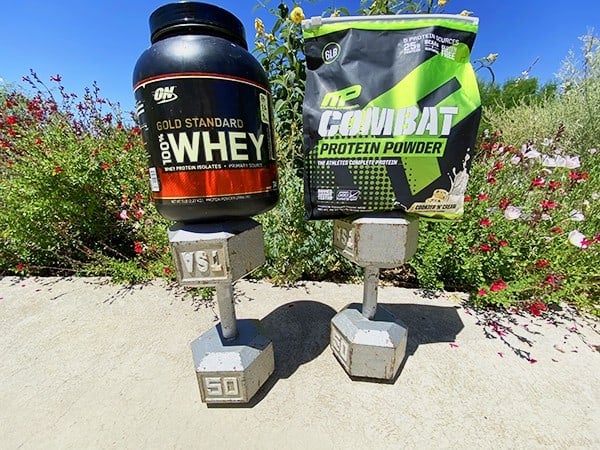 “Battle of the Best-Selling Blends”

** – higher due to extra aminos added during manufacturing. 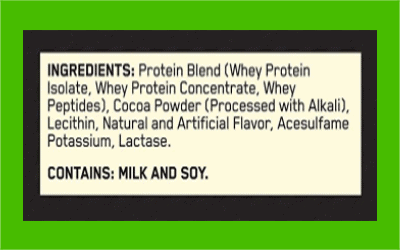 * We see that Gold Standard is also processed though not as heavily, as it contains far fewer synthetic ingredients.

* Both contain fillers, with Combat using more per serving than Optimum Nutrition as evidenced by its lower protein % per serving (71% vs. 79%). 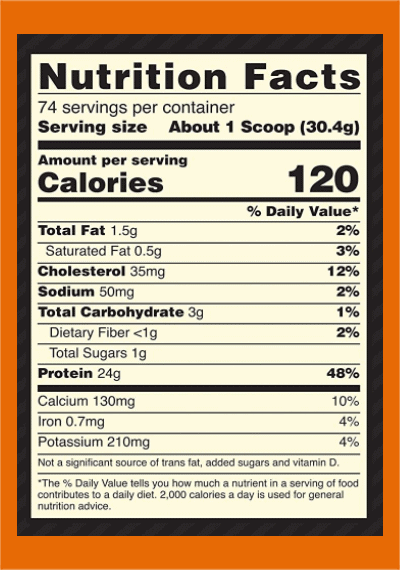 Compared to Cookies N Cream, my taste buds voted for Optimum Nutrition’s Double Rich Chocolate, since it had a more natural chocolate-y flavor.

And though I can taste O.N.’s artificial sweeteners too, they’re not as forward as they are in the Cookies N Cream…and I think that is due to Combat using both sucralose & acesulfame potassium to artificially sweeten it.

Same result in the end, but Combat’s Chocolate Milk did taste good at first & had a creamier texture than ON’s Double Rich Chocolate.

But with the same double-punch of artificial sweeteners that Cookies N Cream had, the lingering aftertaste was a bit much for my sensitive taste buds.

Combat protein’s serving size is over 15% larger than Optimum Nutrition’s (35g vs. 30g).

You can tell by looking at their scoops side by side. 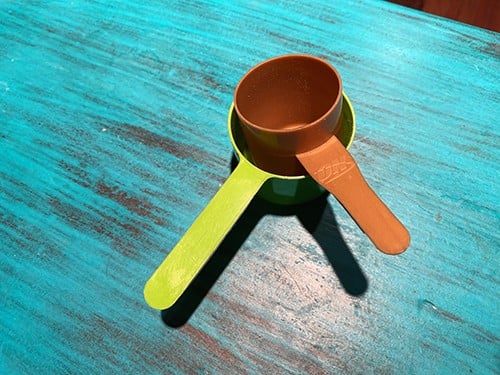 So in only 8 oz. of water it’s not much of a surprise that the Combat had a couple of unmixed specks, who weren’t a bother at all anyway.

(Note: These are based on today’s prices, and these two companies change their prices all the time, so you might see something a little different when you check them out…)

After doing my math I found that Combat & Gold Standard cost about the same per serving of 25 grams of actual protein (not powder): 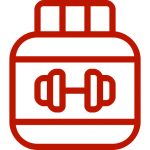 Summary of the Gold Standard vs Combat comparison

* Neither is a pure protein supplement, since both have fillers & artificial flavors.

* However, both can be considered a high quality protein source that’s suitable for use in someone’s lean muscle building program.

* Prices change constantly when it comes to protein powder supplements, but currently the price of Combat is a few cents less per ounce than Optimum Nutrition’s Gold Standard.

* Gold Standard has a higher protein % per serving, so it delivers the same amount of protein per serving with 15% less non-protein ingredients. 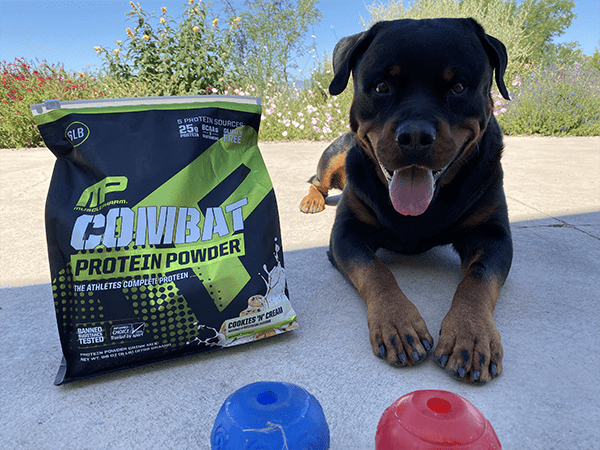 The Hunt For The Best Optimum Nutrition Flavor

I hope that my product review article on MusclePharm’s Combat Protein Powder is useful to you, and that the comparison to Optimum Nutrition’s Gold Standard is helpful too.