In this article I discuss the benefits weighted vests have demonstrated in several sports performance studies.

The main benefits a weighted vest can provide are:

Training with a weighted vest improved athletic & functional performance in a number of areas, and I cover them all here.

Importantly, the benefits provided by the weighted vest training were passed on not only to athletes, but to regular people too, including seniors.

Below the research studies, the article has a section on several ways to get a great weighted vest workout, along with a list of weighted vest bodyweight exercises.

I  also included a bonus section for advanced workout people, focused on training for increasing one’s strength through the use of plyometric drills wearing a weighted vest.

This strength study was done with a NCAA Division 1 football team and achieved amazing results, and I explain their training program in full. 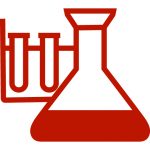 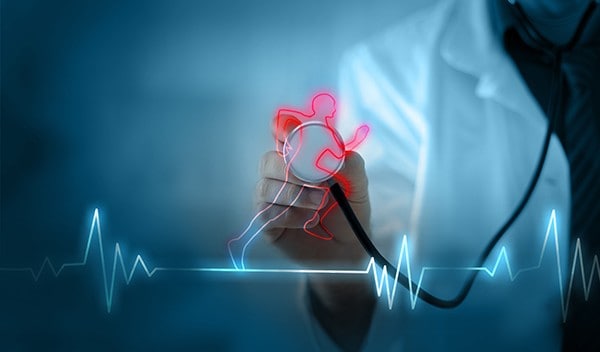 Here are the research studies I mentioned earlier.

I provide the % of bodyweight that the vests weighed in each study if it was listed.

I grouped them into these categories:

There are encouraging signs that wearing a weighted vest while exercising can join the fight against bone density loss – osteopenia – and its more severe version, osteoporosis.

It’s been shown in scientific research that strength/resistance training is effective at slowing bone cell loss.

In some cases, strength/resistance training has reversed this process by stimulating new bone cell growth.

Exercising with a weighted vest is a form of resistance training, thanks to the additional load in the vest.

The findings of these three studies support a weighted vest’s use in this area.

In this study, participants with osteoporosis who performed aerobic exercise wearing weighted vests benefited from:

After 12 weeks researchers noted that the group exercising with the weighted vest benefitted from:

Vest weight: 15% of body weight (at its max in the study’s last stage)

Published in the European Journal of Applied Physiology, this weighted vest study using endurance athletes stated that those with the vests:

This study of treadmill walkers compared metabolic responses between those with weighted vests and those without.

Here’s their conclusion, with my ‘translation’ in parantheses:

“Using a weighted vest can increase the

Here’s a similar treadmill walking study. This one was commissioned by the American Council on Exercise. Experimenting with vests of different weights, the investigators noted that

“the 15% (of the user’s body weight) vest was needed to yield a significant increase in metabolic cost” (calories burned). 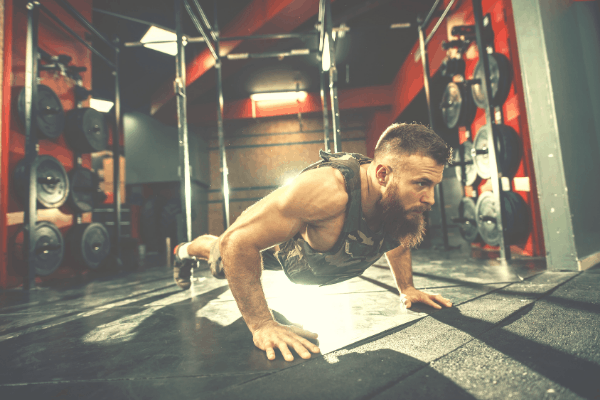 Three clinical studies in this section.

The first two here tested weighted vests as an addition to the warmup routine for athletes.

In both cases, the weighted vest group outperformed the control groups, who warmed up in their usual manner.

This one used well-trained distance runners, and stated that

“The weighted-vest condition resulted in a very-large enhancement of peak running speed and a large improvement in running economy”.

Both vertical jump and long jump performances were “significantly greater” by the weighted vest group.

Vest weight: 2-6% of bodyweight (the 2% group performed the best)

And here, researchers looked at the effect that training with a weighted vest had on running performance (max speed & time) in the 50m sprint.

Depending on the different vest weights, the weighted vest group outperformed the non-vest runners by 5-10%.

I provide the entire training program for this strength study down near the end of the article, if you’re interested.

As I said at the top, the results were impressive.

The group using the weighted vests while performing plyometric drills in addition to their weight lifting program had much greater strength increases over the course of the study, compared to the control group that only weight lifted.

The weighted vest group outperformed the control group in all three areas, showing

If you need a vest, I product-tested several of the most popular models and wrote about it in this article here on heydayDo.

The best of the bunch comes from CrossFit® equipment kings Rogue Fitness; it’s their excellent TacTec Plate Carrier…which you can check out in action here: 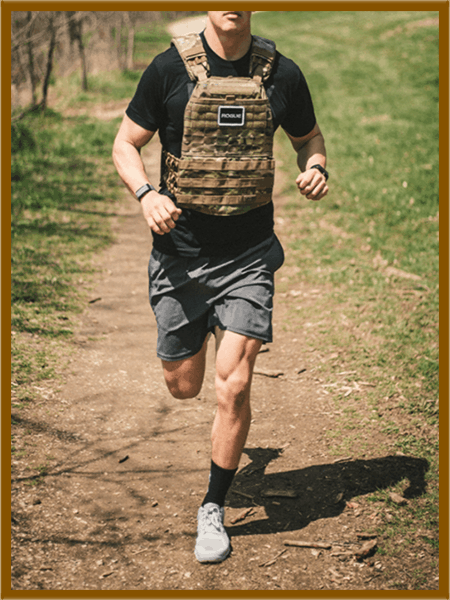 I’ll share several general ideas on ways to put a weighted vest to use for your fitness benefit.

First though, as a gentle reminder:

OK, here are a few weighted vest workout ideas for you.

Tailor them to your goals, make up your own program…that’s what I do.

Walking With A Weighted Vest

There are a number of benefits of walking with a weighted vest, and some have been mentioned earlier in this article.

Take your daily walk’s intensity up a notch by wearing a weighted vest.

As with regular walking, a brisk pace is preferred over a leisurely one.

Wearing A Weight Vest While Running

The same goes for your running routine.

As studies with runners have shown, improvements in cardio endurance, VO2 max, running speed & running economy are some of the benefits of running with a weighted vest.

Bodyweight Exercises With A Weighted Vest

There are several bodyweight exercises that are well-suited for building your own weighted vest workout. Here are some…

Dips (use the edge of a secure chair or low table if you don’t have a power tower or belong to a gym – but save your shoulders, don’t go too deep)

There’s a growing body of research on the benefits of the weighted vest, and I’ve presented some of those results here in this article.

As a review, the four main areas of weighted vest benefits are:

Benefits spread across a range of different groups

The studies we looked at here demonstrated how the weighted vest has benefitted a wide range of people.

Improvements in physical performance occurred with groups as diverse as older people with osteoporosis to strength training football players, from elite runners to a girls’ high school track team.

The weighted vest is a quick & convenient way to add intensity to many physical activities, including walking, jogging, body weight exercises…even household chores.

Intensity added to resistance exercise will signal your muscles and they will grow & get stronger.

This is turn will boost your body’s metabolism and it will become more efficient at burning calories.

As your fitness improves, so will your health-related quality of life, both for your mind as well as your body.

If you’re interested, I did a hands-on product evaluation of several weighted vests and shared my opinions on the best of the bunch in this article here on heydayDo.

The Texas Tech University research paper I shared earlier in this article was a 6-week strength training study using 90 or so members of their football team as the participants.

It was designed to determine:

if strength gains increased when plyometric drills while wearing a weighted vest were added to the strength training program, and if so, by how much.

I was amazed at the results, especially since the study was only six weeks in length.

So I thought I’d share the study’s results with you, as well as the strength training & plyometric drill programs used in the study.

If you’re interested in making strength gains, especially leg strength, this program may be worth a look.

The results in a nutshell:

This tells me that the 6-week strength training portion of the program used in this study was effective by itself and is worth checking out.

However, these participants were not new to weightlifting.

The study notes that all were experienced lifters, not surprising since they all played for a prominent Division I collegiate football team.

All participants were tested for 1-rep maxes before & after the study in the following four exercises:

These were the same exercises that were part of the six week strength training program.

And these were the only four weightlifting exercises performed during those six weeks. 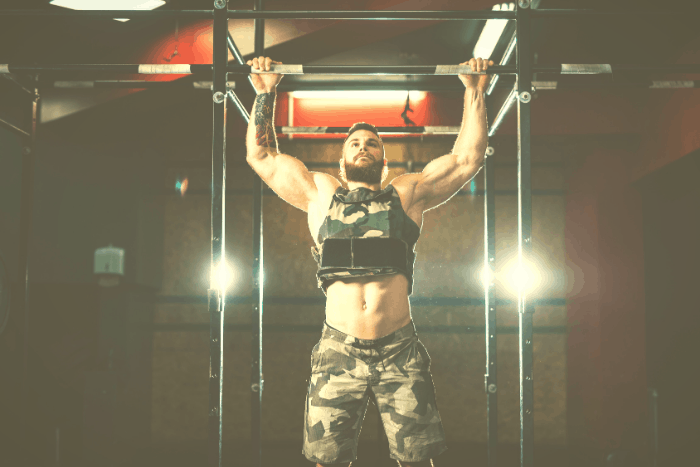 For the sake of brevity I’m just going to compare the “weightlifting + weighted vest” plyometrics guys with the weightlifting-only guys.

Look at those gains in the squat poundages. In just six weeks.

By the way, the “plyos without vests” group finished in between these two for all lifts, and closer to the weightlifting-only group’s numbers.

This pattern was maintained throughout the study.

The 1-rep maxes taken before the 6-week study began were used to establish the weight used for Cycle 1 lifts.

For example, if 200 lb. was the starting 1-rep max for an exercise, the 3 Regular Day routine for Cycle 1 would look like this:

If the 105% lift is successful, then a set at 110% will be attempted. If it fails then the 105% lift becomes the new max to use on the next Cycle, and all set weights adjust upward accordingly.

If 110% was successful, another 5% of weight is added and another 1-rep set attempted. And so on, until failure.

When failure occurs, lifting for that exercise is done for the day.

The last successful 1-rep lift becomes the next cycle’s max weight that all sets’ poundages are based on.

For the groups assigned to the plyometrics, the drills were performed on all lifting days following the weight training portion.

There were three plyometric drills.

Each drill consisted of a few sets with rest intervals in between sets.

Each drill took 5-6 minutes to complete, including the rest intervals.

The vest weight load for the plyometric drills was 10-12% of bodyweight.

“Subject ran in place with emphasis on: high knee lift & relaxation as well as good running style. Each set was done at a slightly higher intensity level until the 4th & 5th sets were ‘all out’ efforts.”

“The objective of this drill was to jump down from an 18 inch bench to the ground level facing the bench and explode back up to the bench. This was done 10 consecutive times to complete 1 set. Three sets of 10 reps were completed. The subjects were asked to jump with all the intensity they had. ”

“The objective was to bound 3 consecutive times across the exercise floor (25-33 feet) trying to jump horizontally as far as possible while under control. After crossing the floor a 3rd time, a 1 minute rest interval was taken. Three sets of 3 horizontal bounds were performed with a 1 minute rest between sets.”

Well, there you have it: a 6-week strength training & plyometric drill program incorporating a weighted vest.

A program that delivered some impressive strength gains, particularly in their legs.

I hope my investigation of sports science’s weighted vest research is of some benefit to you, and that the weighted vest strength training program is helpful too.