Hey there…Important note from yours truly…Back on March 19th, 2020 I spoke with Kettler USA.

They informed me that the Kettler Favorit has been discontinued, and that they are out of stock at Kettler’s warehouse.

I see that the Kettler Favorit is now out of stock on Amazon too.

I’ll leave my Kettler review here up for now, in case any of you who are interested in this model are able to find it for sale somewhere, and want to read a little about it.

I’m not surprised Kettler took it off the market to be honest.

There are better performing rowing machines out there, and I’ve product-tested several of them.

For models priced above $400, I wrote this review here.

And for the inexpensive rowing machines under $400, I covered them in this review here.

Here’s my Kettler Favorit review from 2019…😊

The Kettler Favorit rowing machine is priced between the cheap rowing machines and (well below) the top of the line models from Concept2 & WaterRower.

It’s long-term durability falls between these two groups of rowing machines as well.

A hydraulic rowing machine will have its shortcomings due to this choice of resistance type, so the Kettler Favorit is not ideal for someone who is pursuing a more intense fitness or strength-building program.

It also has a couple of other quirks (that I go into down below) that may not work for some at-home rower people.

However the Kettler Favorit rowing machine is well-suited for the infrequent exerciser or for someone who is okay with limiting their rowing sessions to 15-30 minutes at a time.

It is a well-built home rowing machine that should hold up for years under casual use.

Do you need an exercise equipment mat to protect your floor from your home rowing machine?

A good mat also keeps floor dust or carpet fibers from getting into your equipment’s moving parts and causing problems.

I wrote a buyer’s guide & article on the better equipment mats available for both carpet & hardwood floors here.

Sturdy & well-built -The build quality for the frame pieces is above average compared to rowing machines in the Kettler Favorit’s price range. The steel frame comes with a lifetime warranty

Very quiet while in use

Heart rate monitor – This Kettler rower comes with a heart rate monitor, another nice perk considering its price. There’s a clip that goes on your ear that uses infrared to connect to the console. If that’s not comfy, one of those Polar® chest straps can be purchased separately to use instead

Better monitor – than others in its class, the console display on the Kettler Favorit has a wider variety of features than other cheap rowing machines. It is also easy to see and is power cord free (uses 2 AA batteries)

What’s not so good:

* All hydraulic pistons have limitations when used in fitness machines. And they’re the cheapest form of resistance used in rowing machines compared to air rowers, water rowers, or magnetic rowing machines.

* Kettler Favorit’s hydraulics are no exception. This means you can expect that:

2. after anywhere from 15-30 minutes of use (depending on your effort), your resistance level setting will become meaningless. The rowing machine won’t offer enough resistance and you’ll need to stop rowing until it cools down (30 minutes or so)

* The Kettler Favorit is definitely not the greatest for taller people. At 6’2”, I felt a little cramped on this compact rowing machine that’s only 50” or so in length. (By comparison, the Concept2 Model D is around 8 feet long.)

* The Kettler Favorit does not fold up into a smaller size. You can fold down the metal rowing arms a few inches to about 9-10” of height. But the area footprint of the rowing machine (52” x 32”) stays the same

* No wheels to roll it somewhere

* Sprechen Sie Deutsch? -The owner’s manual, assembly instructions, and display console of the Kettler Favorit seem to indicate that Kettler isn’t interested in hand-holding the typical American consumer. Everything’s in German except for a few short phrases, and the diagrams are not something us regular USA folk can easily decipher.

Any engineer & mechanically-minded types probably need not worry, but for the rest of us – IKEA this is not.

* This means a longer assembly time compared to higher quality rowing machines. The Kettler Favorit rower’s assembly time for most Americans will be a lot longer than the time suggested in the owner’s manual (Kettler says “2 people x 35 minutes”).

And given the vagueness of some of the diagrams, you may join the other owners who built or attached a piece incorrectly, only to find that out a few steps down the road.

*Kilojoule v Calorie: Since there’s no “Calories Burned” on the Kettler Favorit console display (it uses the European unit of energy, the kilojoule), I thought I’d give you the conversion math: 1 calorie = 4.186 kilojoules (4.2, or 4 for short). 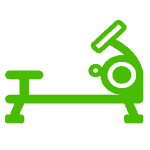 …I’ve written an article here on heydayDo that features instructional videos with tips on proper form and on avoiding common rowing mistakes. It also shows you the different muscle groups that are activated during each part of the rowing stroke. You can click here to read it in another tab.